This week we profile the Peacock Panel #OnDisplay in our Decorative Arts gallery at the McClung Museum. 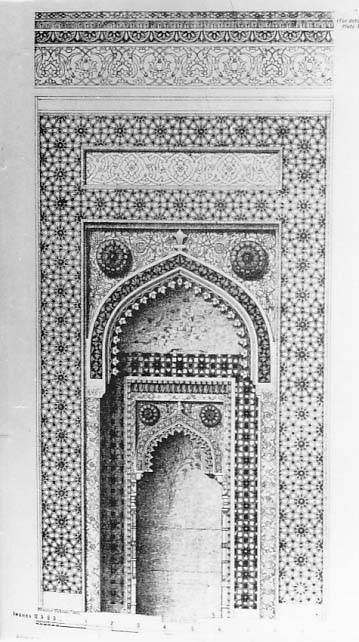 A mihrab at Jama Masjid (Friday Mosque), a 17th-century Mughal mosque in the World Heritage Site of Fatehpur Sikri in India. Courtesy of University of Washington Libraries, Special Collections.

The panel was acquired in 2018 specifically to fill gaps in our collections in the areas of Islamic art and Indian art.

The panel on display is one of two that formed part of a façade of a grand, but unknown Mughal pavilion. It depicts a peacock, the national bird of India, with a snake in its mouth. The arch is decorated with a large, central acanthus leaf with smaller leaves on the sides; two stylized poppy sprays are at each corner. The large cusped arch is known as a mihrab—a niche in a wall that indicates the direction of Mecca, towards which all Muslims pray.

At left you can see an example of a mihrab in Mughal-era Indian architecture from the famous Jama Masjid mosque located in Delhi, in northern India. Our panel comes from the same general region.

Mughal architecture is a combination of Persian, Turkish, and Indian architecture, known for its use of red sandstone and delicate ornamentation. It flourished under Mughal emperors in the 16th to the 18th centuries in northern and central India. Pavilions, like the one where our panel originated, were a standard feature of palace complexes in India between the 17th and 19th centuries, and were used for “private retreat, pleasure, and contemplation.” An example of a Mughal garden pavilion, this one from the collections of the Virginia Museum of Fine Arts. Photo courtesy of the VMFA. The combination of the Muslim mihrab with the peacock which has association with various Hindu deities, including Krishna, reflects the Mughal dynasty’s desire to integrate Hindus and Muslims into a unified Indian state.