One thing that was helpful about last year’s extended closure of the museum is that it gave our curators time to focus on object research. This research allowed us to launch more records online, make updates to our Decorative Arts gallery, and in some cases, have exciting, new insights into our collection. 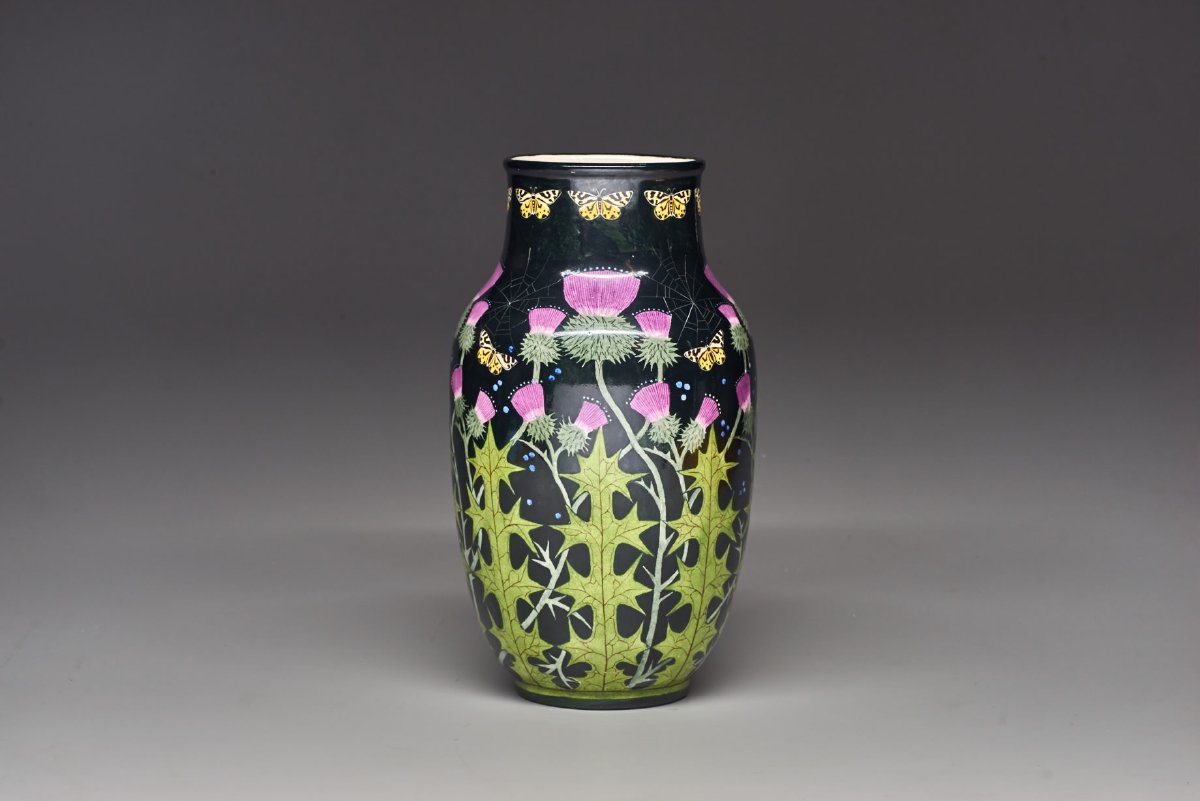 Today’s post is about one such object––a 1914 vase in the museum’s Arts & Culture Collections. I was always intrigued by the vase as it is painted in beautifully vibrant colors in a carefully balanced design with thistles, spiderwebs, and butterflies. The signature on our vase.

Until recently, we had no idea what artist created the vase. It was signed with “S. L’Eplattenier, 1914, Berne.” Because of its time period, creation in Bern, Switzerland, and its Art Nouveau look and feel, I at first assumed that it was associated with the artist Charles L’Eplattenier. Charles was the creator of a Swiss artistic movement known as “Style Sapin” (Pine Tree Style)––a localized Art Nouveau style based on the plants and wildlife of the Jura Mountains in Switzerland. However, the signature on the vase didn’t match his, which of course, begins with a “C” for Charles.

Poster from the Swiss National Exposition, Berne, 1914. Courtesy of Wikipedia.

Museum curators often rely on experts, like art historians, archivists or other museum professionals, to help them with their research. In my case, Dr. Mary McLeod of Columbia University was instrumental in pointing me to the archives at Bibliothèque de la Ville for La Chaux-de-Fonds, where L’Eplattenier spent much of his career. Carlos Lopez, the archivist at the library, was able to help confirm that our vase was made for the Swiss National Exposition in Bern in 1914 (note the “Exp. Berne, 1914” in the signature above).

Lopez provided documents from the exhibition itself showing that Sophie L’Eplattenier exhibited a coffee service (cups, saucers, and plates) featuring flowers of the Alps as part of the Exposition’s 11th National Art Exhibition, and exhibited “decorative vases, a candy box, and a planter” in the Textile Industry Pavilion, where there was an area for “Neuchâtel’s Feminine Union of the Decorative Arts.” Our vase is likely from this section, or else perhaps sold elsewhere at the Exposition.

A newspaper article that Lopez provided from a 1914 volume of La Suisse Libérale on the decorative arts of the Exposition marveled at Sophie’s “superb vases” in the textile pavilion. A huge thanks to him for the translations, information, and image above.

While we have no confirmation in our files, the Knoxville couple who donated the vase lived in Rome, Italy in 1914, and traveled to Switzerland multiple times as evidenced by photographic and written archival evidence. The Audigiers enjoyed collecting art by women while they were alive, and Mrs. Audigier was well-known for organizing regional art expositions in the US. In that light, their purchase of this vase makes sense. A flower drawing by Sophie L’Eplattenier from the collections of Bibliothèque de la Ville for La Chaux-de-Fonds, Switzerland.

Further inquiry to curator Marie Gaitzsch at the Musée Des Beaux-Arts La Chaux-de-Fonds revealed additional biographical information about Sophie. While she lived in the shadow of her brother’s career in many ways, she likely frequented the l’Ecole d’art de La Chaux-de-Fonds, and went on to have a career as a professor of drawing at the art school in Geneveys-sur-Coffrane. She exhibited her paintings, drawings, and ceramics featuring the flora of the Alps frequently at Société des amis des arts de La Chaux-de-Fonds, Neuchâtel, and in numerous exhibitions around Switzerland.

Why do I write so prolifically about Sophie? Because she is an example of a wonderful female artist somewhat lost in the archives. This post also gives a sense of the tremendous research it takes to get the fascinating back stories on our objects. Marie Gaitzsch and her team have also just launched a Wikipedia page on L’Eplattenier. It’s my hope that by writing about Sophie L’Eplattenier here, others will have greater access to her art and story.