We’re excited for you to follow along as we continue to launch new objects for our Adopt-an-Object Initiative! 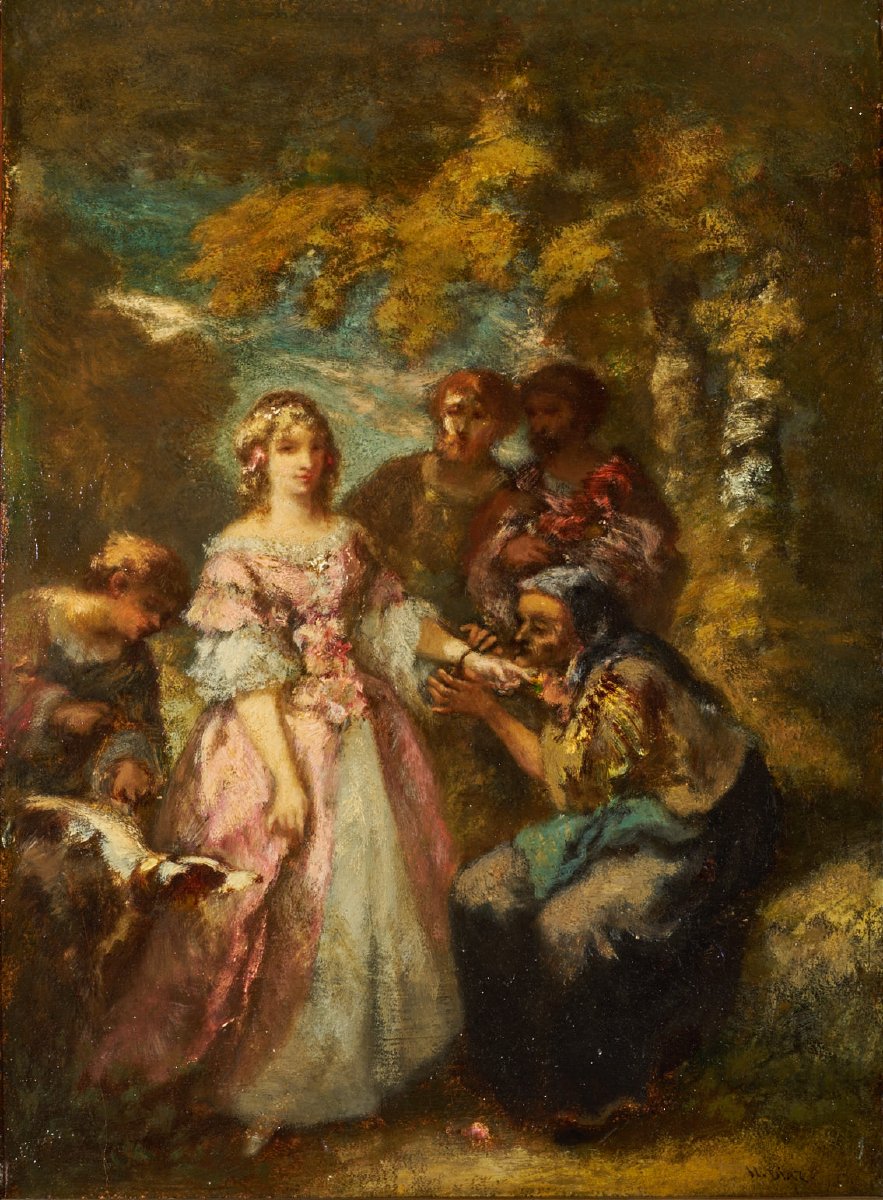 Today’s object is The Fortune Teller, an oil on wood painting by the artist Narcisse Virgile Diaz de la Peña (French, 1807–1876). As you might remember, we also recently launched a companion #AdoptAnObject piece by the same artist.

Diaz de la Peña was a leader of the Barbizon School—a group of artists associated with the Forest of Fontainebleau near Paris who shunned convention to create down-to-earth, humble landscapes. 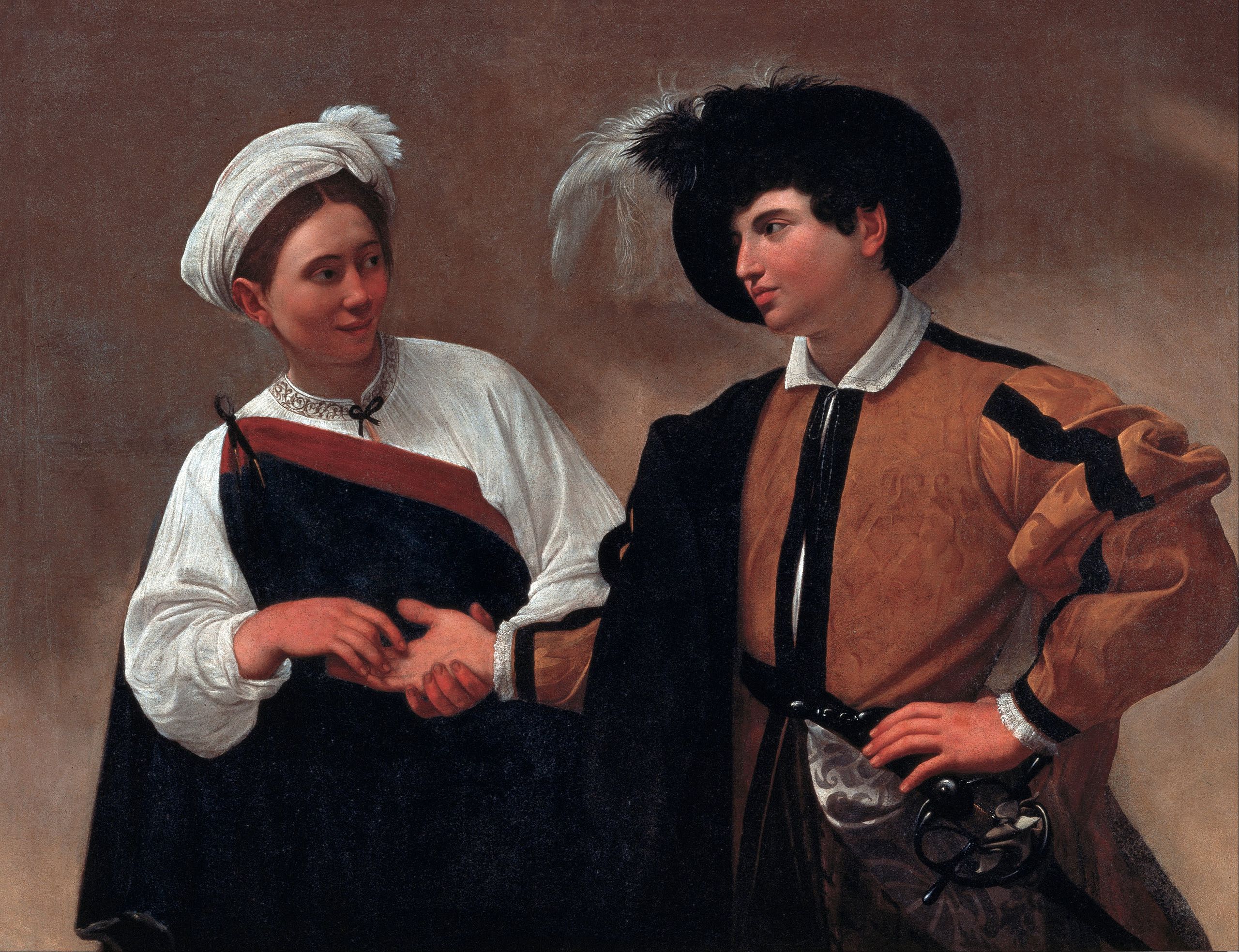 Narcisse Virgile Diaz de la Peña, Gipsies Listening to the Prophecies of a Young Fortune-Teller, 1848, Oil on canvas, Entered the Hermitage in 1922; transferred from the Kushelevskaya Gallery of the Academy of Fine Arts, ГЭ-3860.

In de la Peña’s case, his landscapes also appealed to the public because he filled them with nudes and “exotic” subjects. Fortune tellers and Roma people (traditionally known by the derisive term “Gypsies”) were popular subjects of 17th century genre paintings by well-known artists like Caravaggio (1571–1610). In these paintings, the Roma are seen as exotic or foreign people, and are also often stereotyped as wiley or deceitful (note that in Caravaggio’s painting above, the fortune teller is slipping the man’s gold ring off his finger as she reads his fortune). Originating from northern India, the Romani are a traditionally nomadic ethnic group. Today, they live around the world, but in the 19th century, there was a particularly large population of Romani in Spain and southern France.

This stereotypical depiction of the Roma re-emerged in the 19th century, when French Romantic artists like Camille Corot, and of course de la Peña, depicted Romani people who they likely encountered the Romani in France, Spain, and other parts of Europe in their artwork. The 19th century was a time of colonial expansion and anxiety, and romanticized and/or xenophobic depictions of non-white cultures were common. The Roma also appeared in French literary works of the 1800s, where Roma women in particular were “a symbol of absolute freedom and female exoticism.” Whether depicted with fascination or repulsion, the Romani and other cultural groups were represented as strangers or outsiders.

At the museum, the painting is an interesting starting point for conversations not only about art historical movements and artistic technique, but also about gender, stereotyping, colonialism, European views of “outsider” cultures, and literary and cultural movements of the 1800s. 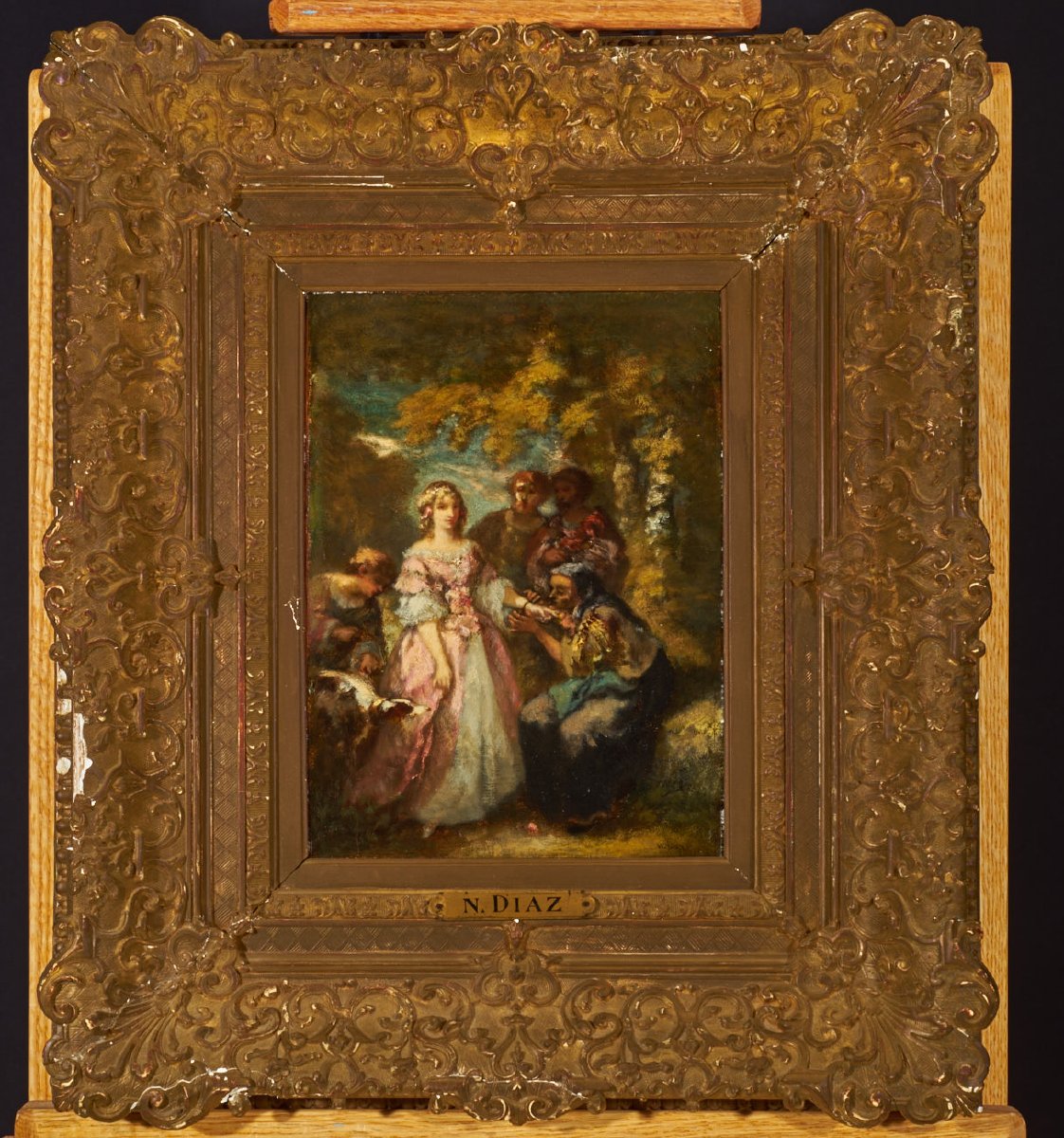 Note the cracking and losses to the original frame above.

Unfortunately, the painting’s intricate frame is so fragile that it prevents the painting from being able to be pulled or exhibited. Along with frame restoration, the painting needs to be glazed (museum glass will help protect the painting’s surface from dust, dirt, and UV exposure) so that it can be pulled for these important teaching opportunities. Help us conserve this object for important educational uses!

Full restoration of The Fortune Teller will cost $1,500.

Gifts should be directed to the Museum Support Fund using this online form. Alternatively, contact Stacy Palado, Director of External Relations, at spalado@utk.edu or 865-974-2143 for more information.